A bankruptcy case can discharge a debt you owe a landlord. And, if you file for bankruptcy before you’re evicted—or while an eviction suit is pending—you might be able to stop the eviction temporarily. But filing for bankruptcy won’t remove an eviction from your credit record. In fact, you can expect eviction information to get reported to sites that cater specifically to landlords.

Does Bankruptcy Clear Evictions and Discharge Back Rent?

It’s relatively common to owe a landlord money after being evicted from a rental property. Fortunately, since rent is an unsecured debt—just like a debt owed to a credit card company or medical provider—it will be discharged (forgiven) when you file a Chapter 7 bankruptcy or a Chapter 13 bankruptcy with a repayment plan.

Some jurisdictions have specialized courts that hear evictions and other disputes between renters and landlords. Some of these courts have the authority to issue judgments against renters for specific amounts relating to money owed for past due rent or damages. These judgment amounts get discharged in bankruptcy, but the eviction will still appear on your credit reports and background checks.

Keep in mind that not all debts get forgiven in bankruptcy. For instance, if you willfully and maliciously caused damage to the rental property, the landlord could file a lawsuit asking the bankruptcy court to prevent the discharge of that debt. Realistically, most landlords won’t go to that trouble unless the unit needed extensive repairs and the landlord has substantial proof that you knew that your actions would likely cause the damage.

If you think you’re about to be evicted or if an eviction action is pending, the bankruptcy could affect how the eviction proceeds. If the court has issued a judgment for possession, you’ll be out of luck unless your state allows you to cure your past due rent after the court enters the judgment (a few allow this).

But you’ll have to act fast. You’ll only have thirty days to file paperwork and deposit your past due rent with the court.

If the suit hasn’t progressed that far, bankruptcy can stop the process at least temporarily. However, the landlord has the right to file a motion with the court asking the judge to lift the automatic stay so that the eviction case can continue forward. If granted, the landlord can start or resume the eviction suit.

A bankruptcy discharge won’t erase past negative credit information, including evictions. The landlord has the right to report payment problems and an eviction status to credit bureaus. The negative information will stay on a credit report for as long as seven years after the event. An eviction lawsuit (sometimes called an unlawful detainer action) can also be picked up and reported as a public record by the credit bureaus.

Some companies, including the major credit bureaus, offer “renters screening reports,” often called blacklists, of people whose names appear in the records of housing courts nationwide.

The company issuing the report isn’t required to remove correct and verifiable information. But, you can dispute anything that’s inaccurate. If it’s unverifiable, the company must remove it from the report. 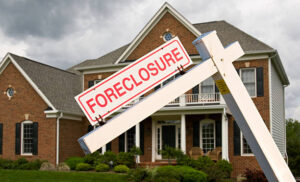 If you are facing foreclosure and the loss of your property you may want to consider your options in bankruptcy. There are many options available to you. If you are losing your home and the house has not gone to foreclosure sale yet, you can file a chapter 13 bankruptcy. This would allow you to pay the past due mortgage payments over time and save the home.

If you do not want to save the home but are afraid of losing your equity, you can file a chapter 13 bankruptcy with a sales plan. If you home is foreclosed your will most likely lose a lot or all of your equity. Generally, banks do not care if you make a profit from the home sale and are only interested in getting their money back. If you file a chapter 13 bankruptcy with a sales plan you can stop the foreclosure and sell the home for full market value. This way the bank gets their money back and you can keep the equity or use the equity to pay off other debts.

In some situations it can be advantageous to file a chapter 7 bankruptcy and allow the Chapter 7 Bankruptcy Trustee to sell the property for you. By doing this you can get full market value and preserve or save your equity and pay off other debts. The Chapter 7 Bankruptcy Trustee, and not you, has the power to stop the sale and get the most reasonable price for the home. The property would temporarily belong to the trustee who, generally speaking, has a lot more authority and power over bankruptcy assets. Otherwise, if the house went to foreclosure, you may end up with a deficiency balance and now owe more money or you could end up with little or nothing at all. If there is equity in your home and there is a threat of you losing it bankruptcy may be in your best interest.

Whether you file a chapter 7 bankruptcy or a chapter 13 bankruptcy the Bankruptcy Court will immediately impose the automatic stay which is like a restraining order against all of your creditors. This will allow you time to make a rational decision and sell your property for the full value instead of losing the property to foreclosure sale or having to sell it fast at a greatly reduced price.

How bankruptcy helps with evictions and unpaid rent in Massachusetts.

The eviction moratorium is ending and unpaid rents are due.  How does bankruptcy help?

Generally, in most cases, a person threatened with eviction can move to a new place, list the past due rent in a bankruptcy petition and wipe out the unpaid rent.

The unpaid rent can also be wiped out in a Chapter 13 bankruptcy.

Bankruptcy can help with evictions in Massachusetts for unpaid rent.  Here are a few different choices:

Eviction proceeding not filed yet then property owners cannot evict a person for unpaid rent.  The bankruptcy automatic stay protects a renter from eviction for as long as it is in effect. When bankruptcy is filed before the eviction is filed a party  involved in an eviction is protected.  The landlord will need to file a motion to lift the automatic stay.  This would remove the bankruptcy protection and then the property owner can evict a tenant for unpaid rent. A renter would still owe rent for the time a tenant occupied the home after filing bankruptcy until the tenant moves out.

Eviction not presently allowed by a court.  The bankruptcy court can protect tenants. A tenant must move out immediately if the court awards the landlord an eviction.  This is if the tenant has not filed for bankruptcy protection and included the unpaid rent. This applies to Chapter 7 bankruptcy or Chapter 13 bankruptcy.  If a renter is facing possible eviction consider filing bankruptcy before the eviction date to get the bankruptcy court protection.  A tenant with unpaid rent will get more time in the home and allow the renter to search for a new rental property.

No eviction yet? File bankruptcy then move

Call us today to schedule a free consultation or visit our website.  Bucacci & Simonian