Many people share personal details of their lives on social media.  Social media and bankruptcy in Massachusetts may have consequences.  Post like vacations they take, places they shop, purchases they make, and even what they wear. This kind of sharing can sometimes have legal consequences. One example would be an angry post about a soon to be ex spouse could cause problems in a pending divorce.  Also, posts that exaggerate your financial situation could cause you problems in bankruptcy.  It is never wise to post information that exaggerates your lifestyle before, during or after filing bankruptcy.  Viewers of your post and creditors could misinterpret it and use it against you.  One example shows just how problematic things can be when you are not careful on social media.

In 2015, the musician 50 Cent filed for Chapter 11 bankruptcy protection. During his bankruptcy he posted several photographs with a lot of money. He displayed a stack of money in his freezer.  50 Cent also posted a photograph of himself surrounded by piles of cash on a bed.  He claimed the bills were props, such as those used in music videos.  The creditors and the bankruptcy judge were not impressed and not amused by those pictures.

According to the New York Times, 50 Cent stated that the postings were important to maintaining his image and for promotion of his music. This made it difficult to determine whether he was hiding assets or money.  This made it difficult to see if he was telling the truth.   His creditors now asked to revalue his assets.  The bankruptcy judge asked him to reappear in court.

Fortunately he received a large settlement from a lawsuit and was able to pay off his creditors in a short period of time.  As you can see, it can be dangerous to post on social media if you are going through bankruptcy.

Creditors do not know anything about you. People who do not know you can easily misinterpret your social media posts. Pictures of a business trip could be seen or interpreted as a vacation when posted on social media.   Visiting a relative out of state for an emergency can look like a vacation.  Eating at a fancy restaurant for a family event could look extravagant.  Be careful of what you post on social media before and after filing bankruptcy.

If you are considering filing bankruptcy in Massachusetts you should consult with an experienced bankruptcy attorney.  It is not wise to take advice from friends and family.  Also, trying to sort through the information on the internet could get you in trouble.  A lot of the information on the internet about bankruptcy is very general and can easily be misinterpreted.  It is always advisable to consult with an experienced bankruptcy attorney.  Call us anytime to discuss your options.  You can also visit our website to schedule an appointment.  The consultation is always free. 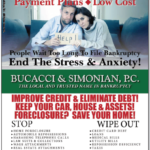